One thing that is always surprising in the cannabis industry is the leaps and bounds that innovations grow. So when I saw a security company at one of these expos I had to ask “What are you guys doing here?” Today, we are speaking with Thomas Gerstenecker from 3|Sixty Secure.

What exactly does 3|Sixty Secure do?

3|Sixty was incorporated in 2013, and provides risk mitigation services to the public and private sectors. These services are primarily in the risk management spectrums. From providing secure transport services nationally, to embedding se

curity specialists within the Canadian government in the Middle East.

How did you get your start in security industry?

After leaving the military’s underwater explosives demolitions team, I joined Canada’s Special Forces counter terrorism group JTF2 as an operational member for a number of years. From there I spent 15 years with the United Nations, as a Chief Security Advisor. During that time, I had conducted countless risk assessments in high-risk countries such as Afghanistan, Pakistan, and Iraq, and also planned and managed many high-risk protective operations. From moving the UN Security Council safely in West Africa, to sitting with Afghan warlords to negotiate safe passage of critical aide to needed communities in very dodgy, remote areas near the Tor Bora mountains, for example. I then decided to leave the UN in 2013 and start a security company within the private sector due to being underwhelmed within the security industry as most security companies that I had dealt with under delivered and over-charged. Our first contract was managing the entire security operation for the 2014 and 2015 FIFA World Cups nationwide, and we currently do a lot of work with Global Affairs.

What do you think is the biggest security threat to the cannabis industry?

First: insider theft – as with many industries, due diligence is critical when it comes to the hiring process. You can’t be in a hurry to get people hired which is a concern with such rapid growth in the cannabis space. Something I have to practice as well when hiring security agents – I need to be 110% confident given they may need to transport 600 cubic feet of cannabis. It’s a really big deal. My hiring process can take six months, that’s why we forecast as much as possible, and have an extensive, pre cleared roster of professionals.

Second: during transport, this may be linked to insider theft. While there is nothing regulated when it comes to enhanced security during transport outside of the regulations you see within the ACMPR, the onus is left to the LP and respective RPICs to ensure secure delivery. However, it is clear from my experience that LPs are very much on top of this issue and take every measure needed to have the product transported in a secure manner. That’s where we come in.
How exactly does a security company become involved with the cannabis industry?

That’s a good question! I started back in 2014, as a perspective licensed producer came to me, and asked me to do the security component for their Health Canada application. During that time I thought, ok so when you are all set up “How are you going to move your product from point A to point B?” And I’m not talking about a gram here or there. I’m talking about major shipments nationally, and across the world. That’s where I really started to focus in on that gap, and look at how I can create a secure transport model that meets the needs for licensed producers, and also the government.

And what are some of the challenges you have overcome in this new venture?

There were and still are a number of challenges, it has been 18 months in the making, but a number of them have to do with obtaining cannabis specific liability insurance. Again, very new in the market, a lot of insurance companies still don’t understand the complexities of it, and only recently have I been able to secure comprehensive liability insurance for cannabis specific transport. In addition to that, a number of the other is licensing requirements that surround the armoured and armed industry.
Tell us about some of the latest innovations featured in some of your transport vehicles.

Sure, I would say over the last 12 to 18 months, I took extensive time and interviewed LP’s, growers, logistics professionals, and others to see specifically what the industry was missing. And then how we could integrate that into a purpose built secure transport vehicle. The result of that is ambient temperature control, the ability to have pallet accessible loading, dock level loading, and things of that nature, in addition to a robust chain of signature from point A to point B.

Will you just be focusing on Canada?

At the moment Canada for ground, but we now also are providing air transport for cannabis nationally, with the intent on moving product globally.

So you can transport cannabis legally between Canada, US and the rest of the world?

Since the cannabis market in the US isn’t federally legal, we don’t do any shipments there. However, other countries are certainly on our list. It’s not the first time an LP has sent cannabis to Europe. Berlin for example was done only recently. So yes it is possible.

What is your perspective on cannabis?

Being a Veteran, and knowing former colleagues that are and have suffered from PTSD, I can say that I can appreciate cannabis use for medical purposes, and also support the recreational use provided Canadians are guided by responsible, realistic legislation. Like any framework, having robust, clear regulations, systems and processes in place that make sense for all Canadians is essential.

Thanks for your time Thomas! Good luck in transporting cannabis and we’ll catch up in the near future to see how you are doing.

High! Canada has been publishing since October of 2015 and we have gotten a little better with each issue we put out - 16 monthly issues later and we are starting to feel we have begun to make some major strides in cannabis education and facilitation of information about the multi-faceted complexity the Canadian cannabis market holds to Canadians from coast to coast and into as many points in between as we can. Print format may be considered by most industries to be a dying industry but for a blossoming industry like cannabis - High! Canada acts to link and enable the community - large and small together under one united interest - that of cannabis in Canada. We have a plethora of talented Canadian cannabis leaders and advocates who contribute to High! Canada every month and truly High! Canada could not publish each month without the talent and dedication of these wonderful people.

There was an error retrieving images from Instagram. An attempt will be remade in a few minutes. 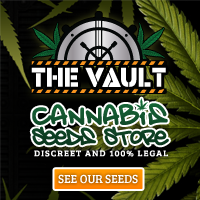